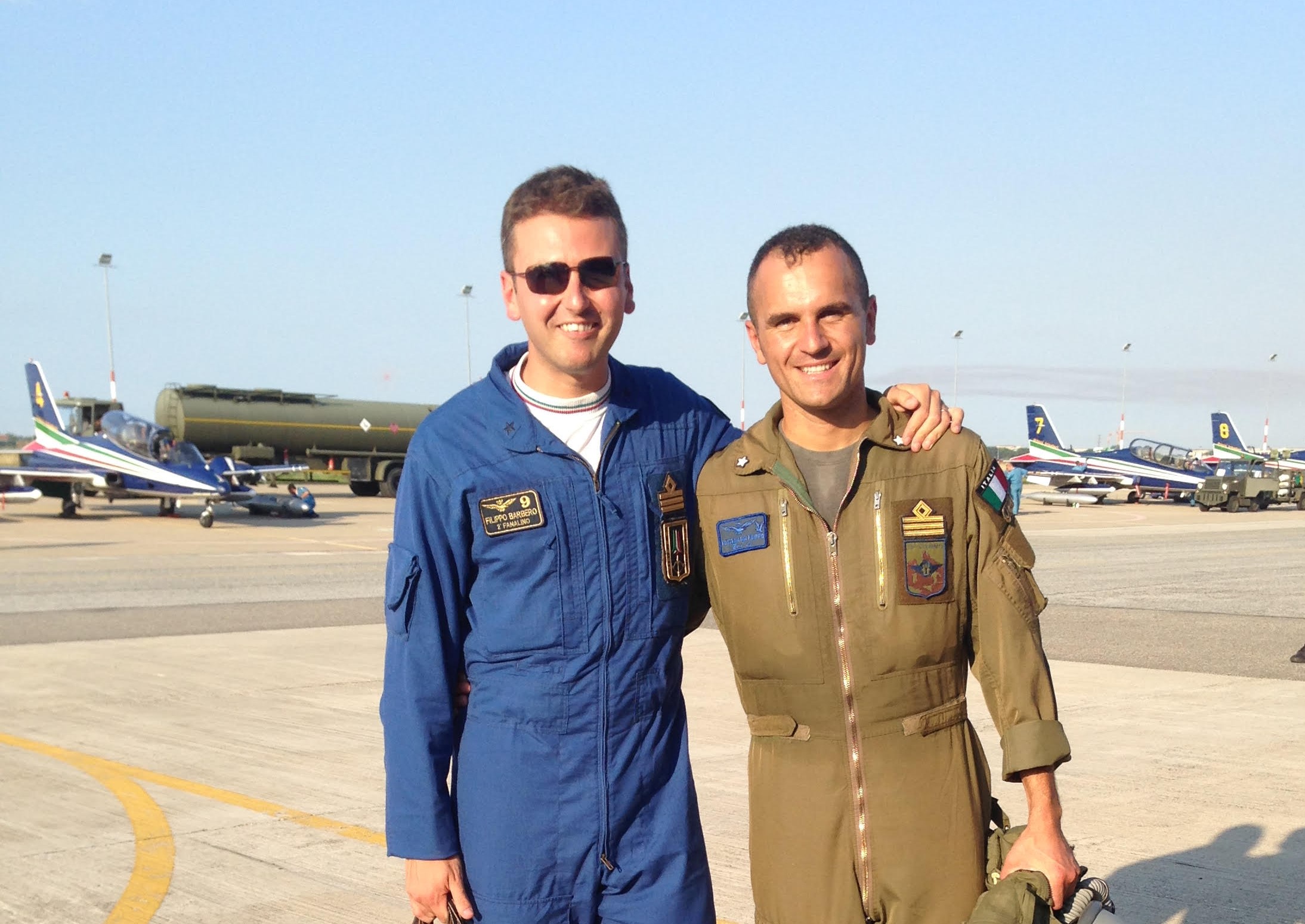 A few weeks ago, I made the lucky acquaintance of two formidable pilots. I am constantly looking to learn as much as I can from better and more experienced pilots. For this reason, I was thrilled to exchange some thoughts with Filippo Barbero, pilot of the Frecce Tricolori (the Italian Airforce Aerobatic Team) from 2010 till end of 2018 and solo pilot from 2015 , and Filippo Fontemaggi, helicopter pilot for Search-and-Rescue and expert of flight safety.

Together they started an online channel called Aviator Channel where they discuss with subscribers about aeronautical culture, airmanship and aviation safety. You can find it on Twitch and I strongly recommend you to subscribe!

The atmosphere of the channel is great! It quickly became the usual meeting point for a variety of pilots and aviation fans. After having discussed my incident with two RC planes in one of the live episodes, we decided to have a simple conversation on the channel on more general topics.

I find it truly great that two pilots of such standing spend so much of their private time for this initiative. Through the channel we all learn to make the sky safer and a more enjoyable place.

You find the full interview at the end of the article. It was done in Italian, but you can activate English subtitles.

Find here some afterthoughts about our chat:

The passion for flying

The passion for flying strikes everyone in different ways: Filippo Barbero told me that his interest in aviation started thanks to a course on aeronautical culture held by the Italian Airforce during high-school times. His contact with the world of aviation happened somehow late, but it was love at at first sight. He then followed the course to obtain the glider pilot license and this set in motion all the steps that followed and for which we all know him.

Filippo Fontemaggi had a different trigger. He admitted smiling that, like many of his generation, he was charmed by the movie Top Gun and similar Hollywood movies. At the same time, he had a genuine and deeptly-rooted passion, which his mother supported all the way.

Indeed, often parents with a different background think of aviation as a merely practical activity. They don’t consider that pilots must continuously train on a variety of topics and get tested regularly on their knowledge and skills.

Also, training as a pilot can become the way to to serve one’s country. Both pilots, indeed, trained with the Italian Airforce. After the first contact with an operative unit, they knew the Airforce was their natural environment.

The value of the military training

A few minutes into our chat, it became very clear to me to what extent the training and the professional environment are key distinctive elements. Military values revolve around the importance of the team to achieve complex goals.

Also, a constant stream of feedback characterises the environment in an operative unit. Its aim is to fine-tune the skills of each pilot to the highest standard.

As civilian and private pilots there is much we can learn from this world. Honesty, respect and transparency are simple qualities we should particularly observe and value when flying.

Filippo Barbero served with the Airforce in theatres of operations before joining the National Aerobatic Team (in Italian “PAN”). Filippo Fontemaggi performed search and rescue mission for the Airforce in high-risk environments. Because of the nature of these activities, I wanted to ask about their relationship with stress and fear, a topic that many pilots avoid talking about.

It is normal and even healthy to feel stress when performing a complex task, especially when it’s something new. The stress is a way for our brain to keep alert. However, if a pilot feels fear before a flight, this should be taken as a warning signal about the quality of their training.

For military pilots, taking-off for a specific assignment is a duty. The mindset is therefore very different from that of a leisure pilot, who can decide whether to take-off or not depending on the spur of the moment.

Also, the purpose is very distant: an Airforce pilot has a concrete task to complete. Generally a mission which is critical for the life of others. A leisure pilot generally flies for more abstract -although merit worthy- reasons, like fulfill their own sense of achievement or simply enjoy the view.

The interview was conducted in Italian. However, you can activate the subtitles pressing the ‘CC’ button and then switch to English clicking on the ‘settings’ icon.

More about the channel

Many of the past episodes can be found on the Youtube channel. This way you can also benefit of the auto-translated captions.

Here some of my favourites: 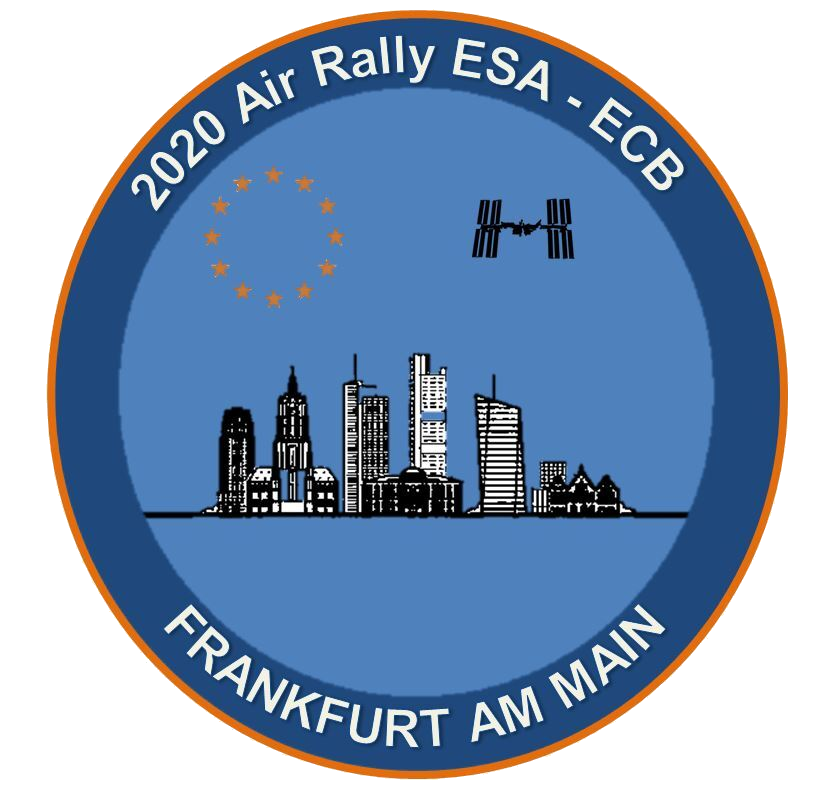 “We’re way too fast, slow down as much as you can” says Ori as we approach Schloss Auerbach, one of the many castles in southern Hesse, built by nothing less that King Charlemagne. I reduce power, pitch up the nose to the limit of stall and extend flaps. In matter of seconds our speed drops by 35 knots. “Great! Now off to RID VOR”. This way we headed to gain the second place at the 2020 ESA-ECB Air Rally.

What is an air rally?

Back a few years, air navigation was conducted relying only on paper charts, compass and stop watch. There was no GPS and even no radio navigation aids (like VORs). A great way to train pilots was to have them compete in races of precision. Pilots would need to reach given waypoints exactly at the time declared and every deviations either in terms of time of space would add to a penalty. The crew to complete the course with the least penalty would win.

Today, most pilots just rely on their GPS, after obtaining their license. Moving maps and GPS are indeed great tools if used properly, but one should not lose proper navigation skills, so air rallying is a great way to keep one’s ability honed and have fun with other pilots.

The idea of our own Air Rally

2020 has been an incredibly bad year for most people because of the COVID-19 Pandemic. Aviation was among the sectors that were hit harder.

I had been planning for months to join a very special competition, the Air Rally of the Six lakes, organised by Aeroclub Como and to be run with Seaplanes. Due to COVID-19 my original plans were sadly frustrated and the race was first postponed and then cancelled.

I really did not want to give up, after so much preparation. At the same time I wanted to make any possible event meaningful for who was truly suffering because of COVID.

After a lot of reflection, I put some ideas down on paper and discussed with some friends, members of the flying club of the European Space Agency. After a brief call, we decided to go ahead and put the foundations for the first ESA-ECB Air Rally together with fund-raising for various intiatives.

We were also blessed with the participation of Paolo Ferri, former Spacecraft Operation Manager of the ESA Mission “Rosetta” and Head of Mission Operations when the Air Rally took place. Paolo was fundamental for the success of our event: he was our honorary judge, he took all the air-to-air pictures and gave an unforgettable presentation about Mission Rosetta. The talk with him was truly a special experience to understand the intricacies behind one of the most complex missions of space exploration in the history of mankind.

I strongly recommend to take a look at the Masterclass series, which he recorded for the European Space Agency, and to his recently published book about mission Rosetta (“Il cacciatore di comete“, the comet chaser)

Pilots and navigators gather around the table of the flight planning room. For this edition of the Rally it was decided that the pilots would agree together the route rather than receiving a given one from the judges.

After a brief discussion the route is decided: EDFE (Egelsbach) -> RID VOR -> The entry of Eicher See (a small marina on the side of the Rhein River) -> the Coleman Airfield (a former US base) -> Castle Auerbach -> RID VOR and then back to Egelsbach.

All navigators work on their planning, calculate routes, times and speeds. Check the weather and wind corrections. The hall is silent, but the tensions is high. It’s a friendly contest, that’s clear, but nobody wants to lose.

All crews walk to their aircrafts, run the pre-flight checks and start the engines!

Ori and I decided to fly with a Diamond Aircraft DV20 of my flying club. We chose it mostly because it’s responsive, offers amazing visibility and can accelerate or slow down in matter of instants, should that be needed.

We had a shocking surprise as we hopped on, though. The directional gyro, a really important instrument for precision flying, had been removed due to some malfunction in a previous flight.

When flying the compass gives very erratic indication due to the movement of the plane on different axes and its acceleration. For this reason, when flying the gyroscopic compass is preferred. It keeps a steady heading thanks to a fast-spinning rotor and is not subject to the errors which affect the compass.

Running this type of competition without that instrument meant that our competition was already going uphill. We don’t lose our cool. Visibility is good and I am confident that we can locate the way points also visually.

We accelerate on the wet runway 26, we detach from the asphalt at 55 knots and the DV20 climbs nicely through the cold sky. On the ground, the participants stare with awe at the planes lining up and departing one after the other.

Close to RID-VOR, we were in contact with the mighty Maule of Christian. Paolo, on board, took great air-to-air shots of all aircrafts.

Too fast! Too fast!

The rally was going well, we were practically perfect on all waypoints. We just had a slight delay on the entry of Eicher See, but still nothing dramatic if we could make sure that the other legs would be flown precisely. But just as we approached Castle Auerbach, a castle in the hills erected by King Charlemagne, Ori warned me that we were very fast and had too much advantage with respect to the planned target time. I pitched up the plane, applied carburetor heat and reduced power. As soon as the airspeed indicator dropped below 90 knots I also applied full flaps and reapplied power to maintain the plane at 55 knots. The DV20 maintained its speed without any issue. At such a low speed any turn must very gentle and the bank must remain very contained in order to prevent a stall.

“We made it!” announced Ori “now off to RID”. I “cleaned” the aircraft, which means retracting flaps, and pitched down to get back to our cruising speed.

The last leg was exhilarating. We joined in formation the other aircrafts who kept orbiting around RID and then landed back in Egelsbach winning the second place of the 2020 ESA-ECB Air Rally.

More visual narrations of the event

The main purpose of the event was to raise charity. The many donations received were given to the ONG “Emergency“ which offers free medical care in war zones and in areas affected by extreme poverty, attending a patient every minute since 1994.

I would like to thank wholeheartedly Paolo Ferri for his involvement and for sharing his unique experience. I would like to thank Gavox Watches for sponsoring the first prize , all the volunteers who supported our event, Holger Neuhaus for the amazing pictures, Dirk Wagner for the moderation of the event with Paolo Ferri, Diamond Aircraft for letting us use their space and Motorflugschule Egelsbach for additional logistical support.