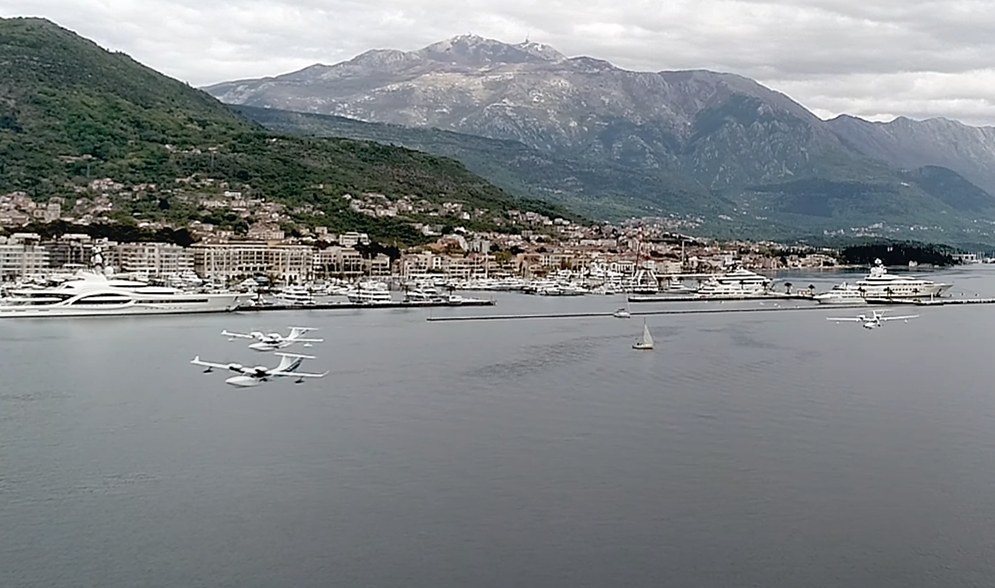 Seaplanes carry with them a charm that no other plane type has.

Difficult to say why. In our heads they certainly recall images of movies like Indiana Jones, The Aviator or Porco Rosso.

At the beginning of aviation, water planes enjoyed at least as much fortune as land planes. Indeed, the possibility to use immense water bodies to take off and splash down, seemed a better alternative to unpaved short grass strips and flying boats were generally flying the longest intercontinental routes, like that from Australia to UK by Qantas.

Historic events of astonishing importance like the Schneider Trophy or the “Decennial Air Cruise”, led by Italo Balbo, were also conducted with seaplanes. The speed record for piston-engine powered aircraft was for a few years the one that the famous Macchi Castoldi – MC72, one of the most magnificent machines ever designed, scored in 1934.

However, after this initial and relatively long-lasting period of success, during World War II, seaplanes let the pace to faster and more agile land planes. Seaplanes found more commonly employment as support vehicles.

Following the end of the war, seaplanes in Europe lost little by little their status. Water aerodromes were closed, or simply forgotten, one after the other, and this beautiful way of flying was kept alive only by a handful of passionate aviators and organisations, like Aeroclub Como, active since the 1930s. Very different was the fate of hydroplanes in North America, where, due to geographical and social characteristics, seaplanes kept being designed, produced and employed without particular hiccups.

Back to the future

The upcoming establishment of a European Seaplane Pilot Federation is a great signal. In facts, representatives from 14 states met in Mallorca in September 2021 for the first European Hydroaviation Congress. They agreed to establish a pan European Association with the purpose to lobby for uniform and more understanding set of rules for seaplane across the EU. Indeed, General Aviation overall enjoys uniform application of rules across the Continent. Sadly, water aviation falls still somehow hostage to national waterways rules. The result is an unjustified hinderance to its existence or its ability to develop.

In Italy, Aviazione Marittima Italiana (Italian Maritime Aviation) made stunning progress. Together with Regions and Municipalities, the association founded by Orazio Frigino and Graziano Mazzolari, maker of amphibian floats for ultralight aircraft, signed several memoranda of understanding to reopen historic water aerodromes across the Country. The main goal to create some viable stop-over bases for seaplane pilots travelling across the Continent.

Indeed, in the context of the Covid pandemic, general aviation grew markedly in several EU countries. Travellers looked for alternatives to airline flying. General Aviation, unknown by many before, succeeded in acquiring some considerable portion of the market. The water aviation segment benefitted of this trend, too. As a matter of facts, various entrepreneurs and companies moved the first steps. Some Aviation Authorities already issued approvals for Seaplane AOCs. Connecting wealthy cities with holiday destinations on coasts of lakes and seas represents the main target. The use of existing waterways, allows to avoid the high costs related to airport slots and handling fees. In addition, companies have already eyed the feasibility of routes between Italy and Greece, where, for instance, Hellenic Seaplanes is ready to start operations in 2022 with a fleet of modern Twin Otters.

Back to the glamour

Against this backdrop, seaplanes are back to charm the public with more than just connecting two places. As Richard Bach splendidly captured in one article, if you asked random pilots why they fly, almost nobody would answer “to fly from A to B”.

And indeed the beauty of the seaplane lies in the very machine and its possibilities. Imagine to dock at the pier of a lakeside town in Italy. Drink a freshly brewed espresso at the local yacht club. Then hop on again, maybe with a friend, to look at the beautiful Villas from the best angle, from just below 2000 feet.

On the East side of the Adriatic sea, Dragisa Raicevic, President of the Seaplane Regatta MontAdria, launched a second edition of the rally. Around 30 seaplane crews will come to Montenegro, in the first week of June 2022. It will be an incredible occasion to connect with seaplane pilots and makers. Moreover, Montenegro with its history, geography and culture, is the perfect link between Europe and East.

With the ongoing pandemic it’s hard to make strong commitments. However, we work to launch some seaplane events at the end of Summer 2022. Come check for more information in these pages soon!

The Voyage of the Southern Sun: in 2015 Michael Smith started the circumnavigation of the globe aboard of a small Rotax-powered Searey. Don’t miss the DVD and the book he wrote.

Gli Scarponi del Cielo (Scarponi literally means boots, but it’s a colloquial term to mean floats) – a vintage short movie, directed by Antonio Leidi in the 1960s. it shows unique views of Lake Como and the life of seaplane pilots.

Porco Rosso – An amazing animation movie by Hayao Miyazaki. It takes place in Italy in the age of the seaplanes (a fictional early XX century). It features, a pig and a reinterpreted red Siai S21.